Bill played chess fanatically in his teens, eventually to junior international level. After a 17 year "retirement" he returned to it and became involved in the administration side as Secretary of the Edinburgh Chess Club (established in 1822) and then President of Chess Edinburgh, which runs the team league structure in the Lothians and a number of local congresses. It was therefore natural that he combine his work in the game with his web design skills and created sites for both these bodies. 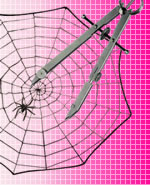